The superb advantages of carbon nanotubes (CNTs) cannot be exhibited completely by devices using random CNT networks as channel materials due to the large tube-to-tube contact resistance. Traditional Langmuir-Blodgett (LB) method with direct compression and dipping has little performance improvement for films due to defects of CNT orientation. Here an improved LB method with gradually increased surface pressure scheme has been proposed to fabricate aligned carbon nanotube field effect transistor (CNFET). Comparing the CNFETs with aligned CNT channel by LB method and the carbon nanotube thin film transistors (CNT-TFTs) with network CNT channel by spin-coating method, the device mobility increases from 2.044 cm2/ (Vs) to 30.81 cm2/ (Vs). In addition, the CNFET shows a higher on-state current and a lower subthreshold swing. The performance improvement for the aligned CNTs by multiple compression and expansion cycling of the LB method is an important foundation for future development of CNT-based devices, especially flexible devices.

All-carbon-nanotube thin-film transistors (ACNT-TFTs) are proposed and fabricated on a transparent glass substrate by a facile solution-processed method, with 95% enriched semiconducting single-walled carbon nanotubes (SWCNTs) serving as channel materials and mixed SWCNTs as source/drain/gate electrodes. The device demonstrates excellent electronic properties with an on/off current ratio over 105, a threshold voltage of 8 V, a subthreshold swing of 1.13 V/dec, a device mobility of 10 cm2/vs, as well as a transparency of 80%. The proposed device is highly promising for the next-generation display application. Additionally, the facile fabrication method and low-temperature process match well with the requirements for manufacturing.

A novel concept of tuning the on-current for p-type carbon nanotube thin film transistors (CNT TFTs) by SiO2 passivation layer has been proposed, which meets the different current requirement for macroelectronic applications. The adsorbed oxygen molecules shift the fermi level down towards valence band, which decreases the barrier height between CNTs and electrodes for holes, so that an as-made CNT TFT with titanium or gold electrode exhibits dominant p-type conduction behavior although the intrinsic behavior of carbon nanotube (CNT) is bipolar. In order to tune the on-current of the p-type CNT TFTs, annealing process in high temperature and SiO2 passivation layer by Plasma Enhanced Chemical Vapor Deposition are used to desorb and prevent oxygen molecules from adsorbing onto the channel again. The methods for forming passivation layer are industry-compatible. Important factors affecting the tuning performance include the thickness and the length of the channel layer are studied in this paper. Besides, the mechanism of the tuning process is disclosed. We found the on-current tuning effect by SiO2 passivation layer is more significant for CNT TFTs with longer channel length than those with shorter channel length. Moreover, a positive correlation between the tuning efficiency and the thickness of passivation layer is concluded from experiments.

To meet the requirement of flexible and wearable electronic devices, strain sensors with high sensitivity, stretchability and reliability are essential prerequisite. In this work, we have developed a strain sensor of resistance type, which is composed of standing multi-walled carbon nanotube (MWCNT) network, reinforced by PDMS film. Benefiting from the standing MWCNT network structure, the strain sensors show high-sensitivity not only in high strain but also in the low strain region (10%). In addition, the designed sensor can overcome the nonlinearity defect. The performance of the proposed strain sensors can be controlled by varying the length and density of the as-grown CNT samples. By adjusting the CNT samples, a gauge factor up to 4.5 has been achieved. Besides, the strain sensors also show high stretchability, with strain up to 120%. Finally, we utilized the sensors to detect the motions of human fingers, demonstrating their high performance in applications. 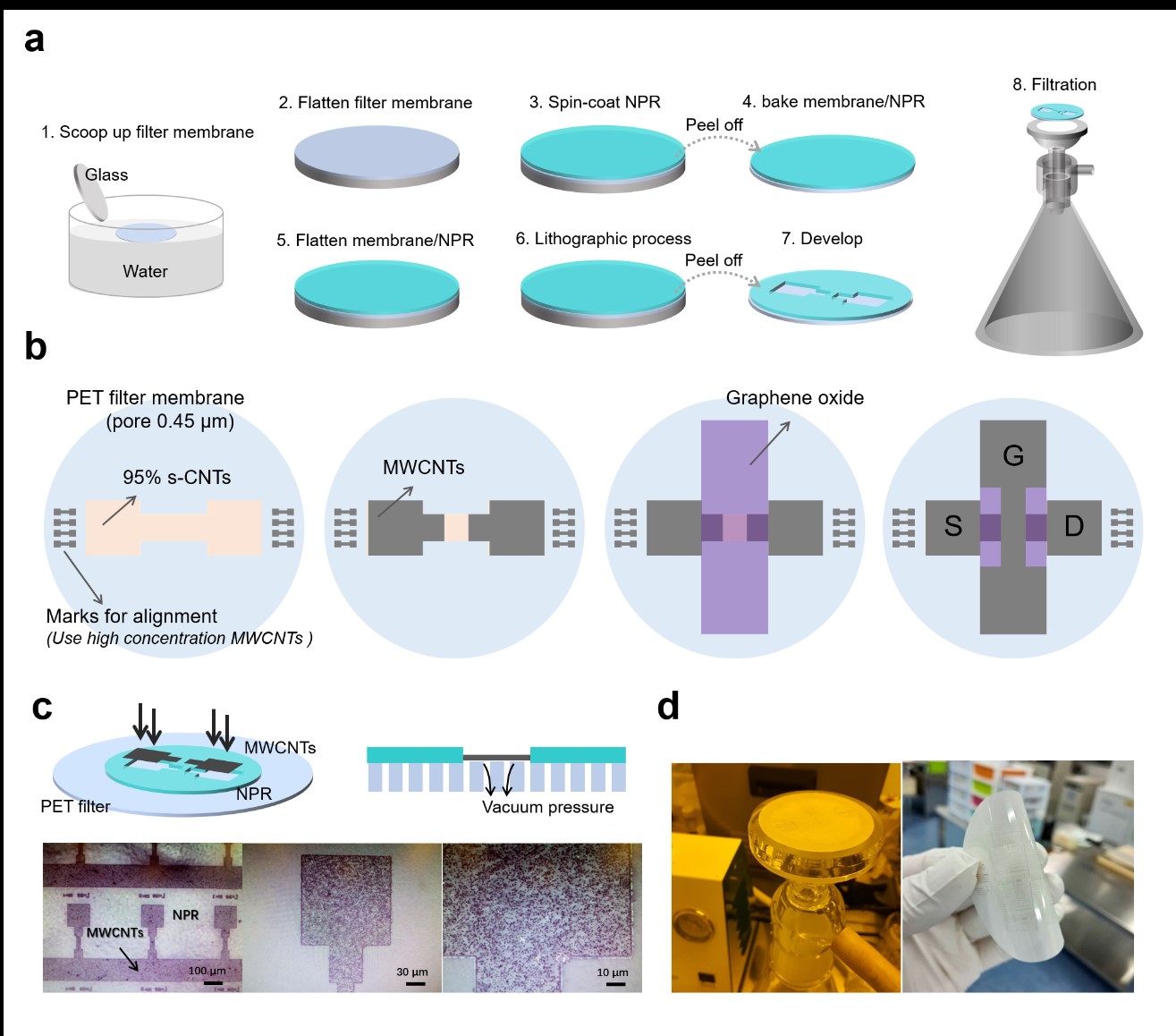 Supported by Thin Film Transistor and Advanced Display Lab, our lab mainly focuses on the research of advanced display, including the CNT and IGZO based transistor, as well as the simulaion of pixel driving circuits. Other electronics such as stretchable sensor and friction generator are also of interest. The pictures above are the photos of our group leading by associate Prof. Min Zhang and the clean room.