Forming sterically demanding quaternary carbons by the reaction of nucleophilic carbon radicals with electrondeficient alkenes is attractive for several reasons: the forming bond is unusually long in calculated transition structures the rates of addition of tertiary radicals to electrondeficient alkenes are faster than those of Me, primary, and secondary radicals;and stereoselectivity in the addition of tertiary radicals to prochiral alkenes is typically larger than that of primary or secondary radicals. This result represeed the fntirst utilization of such substrates in a C−C bond-forming reactionsince their initial disclosure by Okada. This paper surmise that the reason tertiary carbon radicals have not heretofore played a significant role in assembling quaternary carbons is the lack of convenient methods for generating these intermediates from widely available tertiary alcohols.Furthermore, despite the pronounced advancement of visible-light photoredox-catalyzed transformations in recent years, methods that generate tertiary carbon radicals remain largely unexplored. In this Communication, they report such a method. 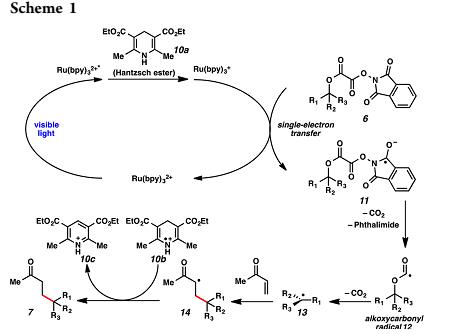