The major scientific goal of our laboratory is to uncover the molecular mechanisms underlying cardiovascular diseases and metabolic diseases. We are specifically interested in two second messengers, inositol 1,4,5-trisphosphate (IP3) and diacylglycerol (DAG) that are liberated during hydrolysis of phosphatidylinositol-4, 5-bisphosphate (PIP2) by phospholipase C (PLC), and how they play physiological functions via their direct receptors, IP3 receptor (IP3R), protein kinase C (PKC) and protein kinase D (PKD) respectively. 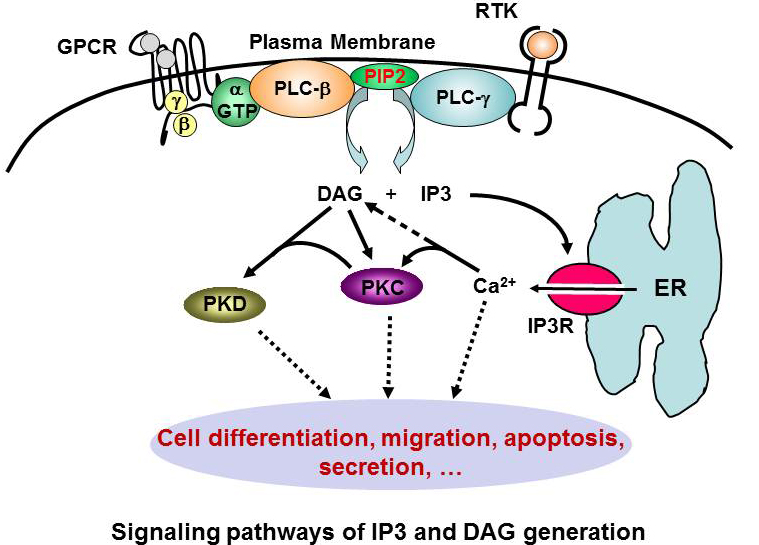 There are two major pathways to stimulate the generation of IP3 and DAG inside the cell: activation of receptor tyrosine kinase (RTK) by growth factors like EGF and TGF; and activation of Gq protein coupled receptor (GPCR) by binding with peptide and protein hormones like vasopressin, thyroid-stimulating hormone, angiotensin, and neurotransmitter like GABA. IP3 binds to IP3R, a family of intracellular Ca2+ release channel predominantly locating in membrane of endoplasmic reticulum. Thereafter the opening of IP3R results in increase in cytosolic Ca2+ concentration. In mammals, IP3R contains three different isoforms (IP3R1-3) encoded by three distinct genes; on the other hand, DAG binds to PKC and PKD, both of which belong to a superfamily of serine/threonine kinases containing a large number of members.

IP3R-mediated Ca2+ signal, and PKC- as well as PKD-mediated phosphorylation activities have been supposed to play various cellular functions including smooth muscle contraction, cell migration, and cell proliferation etc. However, their physiological functions in vivo especially cell type-specific functions are not well understood partially due to the lack of conditional knockout mouse models. One of our scientific aims is to generate conditional knockout mouse models of these genes and to dissect their cell-specific functions in vivo.

Another scientific focus of our lab is to determine whether and how these molecules function during diseases especially in cardiovascular disease and metabolic syndrome. As predicted in China Cardiovascular Disease Report 2010, about 230 million Chinese people are with a high risk of cardiovascular diseases including high blood pressure (~200 million), stroke (~7 million), and heart failure (~4 million); on the other side, there are more than 60 million people over 18-year-old with metabolic syndrome which increases the risk of developing cardiovascular disease and diabetes. Our efforts to investigate the molecular mechanisms underlying these diseases could benefit the discovery of novel therapeutic assays and drug targets.